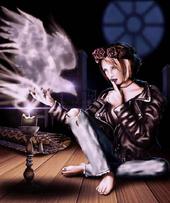 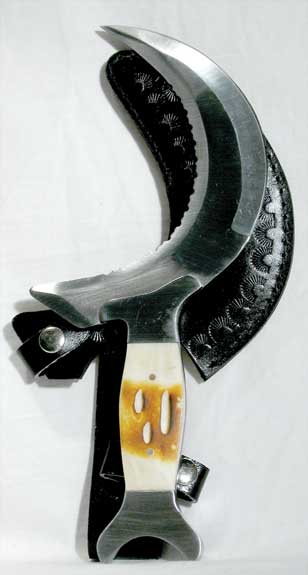 Cord cutting is a ritual done to remove unhealthy energetic attachments between yourself and another person or persons. I believe that Diane Stein was the first to detail this protocol in her book "Psychic Healing With Spirit Guides and Angels." I will transcribe her tech and append a number of variations that may suit your occasion. This is well-worked magickal practice which has developed considerably since her writing.

It is illuminating to consider what these cords are. The theory is that they are the visualized energy transfer conduit between two people. One is usually the donor, and one is usually on the receptive end. It is a relationship of dependency between a stronger being and a weaker being. If this is sounding unhealthy already, good! However, it has been theorized that these conduits are modeled after the umbilical cord. Your first cord cutting ritual was at birth! That was the severance of the meat of the cord, but there is usually no doubt that an energetic cord of (hopefully) healthy dependance remains between baby-child-young adult and their parents. Cords also form along this umbilical model between friends, lovers, spouses, employees and employers...and unfortunately between predators (aka energy vampires) and their prey.

Because we are all people somewhere on the spectrum of mental health and emotional unbalance, with motives from pure to puerile, there are many opportunities for cords to be formed, whether we like it or not. Some of these connections are healthy, others codependent, others outright malicious.

Diane Stein's original exercise goes:
"Enter the meditative state, ground and center, do full body
relaxation, and invite in your spirit guides, angels, and God/
Goddess/Source. Place protection around yourself. Look within and
ask your guides to show you the first layer of negative chakra cords
to be removed. Look at your solar plexus first. You will see coming
from that center one or more of what look like electric cords plugged
into it. They will seem ugly, dark, or moldy looking, and of various
sizes and thicknesses.

Pick one to focus upon and ask whom it is connected to. You will see,
feel, or know ther person. If it feels right, ask to cut the cord; if
it doesn't feel right, there will be another time. Cutting the cord
does not harm the other person in any way, it just frees your energy
from that person. To cut the cord, visualize scissors or light doing
the job, or ask your guides to cut it or unplug it like a lamp. The
cord will snap back to the person it came from; if it doesn't or there
is a root of it left, ask your guides to take it away. Send light to
the person who has been released, if you can, then fill yourself with
healing light where the plug came out to heal the chakra."

I was taught a variation of this by Reclaiming teachers. We would go to each chakra in turn, starting with the Root Chakra and proceeding up to Third Eye. If you just do Solar Plexus cords, you would miss the cords attached to your Heart with an ex who you can't get over, or the Root Chakra dependencies with a boss who uses your paycheck or job security as a way to control you, and so forth. I disagree with her that there is any “need to know” who the cord is shared with. “Needing to Know” is a trait of obsession which only benefits either the unhealthy attachment at hand, or the tendency to enter into others in the future.

There is no need to cut cords from the Crown Chakra. This is the chakra of the Higher Power, and cords to this chakra only attach to the Divine nature we all share.

We also used actual knives to cut our cords, and the ideal would be your ritual Athame. I have a very gnarly Boline for this work!

Some cords of love lost or codependency are re-formed out of habit, and this is why we should repeat this operation every day for a week or so to get over whatever grief or unhealthy attachment.

Some very persistent Energy Vampires are very aware of this magickal act, and will know when their feed tube is cut off, and reattach it. I have heard of and used a couple of these strategies, but really this is a very rare situation which should be scrutinized to eliminate that the source is not an internal one.

1) First, realize that any agent who seeks to feed off your energy is inherently confessing that they are weak and you are strong. This knowledge will ALWAYS give you the advantage in such a struggle. Most victims feel powerless compared to their predator, but this is a cheap mind trick which is often the ONLY developed skill of the vampire. If they were truly more powerful than you, they would not need you at all.

2) Use Banishing oil or Four Thieves Vinegar to rinse the ritual knife, athame, scissors, etc., before and after the cord cutting. Four Thieves Vinegar is used to eliminate and bring dissolution to enemies, hexes, and the like. The Witch Bottle technology is a similar way to diffuse negative magick sent your way.

3) Instead of allowing the cord to "snap back" to the vampire, plug it back into either the Crown Chakra or another Fountain of positive energy such as a Unicorn Spirit Guide, Guardian Angel, or the like. The needy party is then flooded with more energy than they know what to do with, and become healed by communion with the Divine. Sometimes otherwise positive romantic relationships can become discordant or veer into unhealthy or codependent terrain. You might try re-attaching your cords to your Beloved to the Crown Chakra, to bring the relationship back under the guardianship of each other's Higher Power.

4) Instead of allowing the cord to snap back, plug it into some large, immobile, and useless material object, such as a junk van on a wrecker lot, or a building that is always on the market that nobody will buy. This connection will cost the parasite more energy than they can afford, and theoretically they will give up after a few more attempts to re-attach.

5) You can hand the severed cord off to any God, Goddess, Spirit Guide, Totem Animal, or Ancestor that you are on good terms with, and ask them to take care of this for you.

6) Attach the severed cord to a mirror. Put the mirror in a black bag or pouch some place away from your home where it will be undisturbed for some time. This metaphysically causes the perpetrator to reflect on what they are doing and receive the energy they are giving.

Some of these techniques are tried and true, and others are more experimental Defense Against the Dark Arts. I would definitely ask for feedback on how these or the many other versions have worked for you.

Most importantly, since Nature and Magick abhor a vacuum, return to mundane life and replace the negative energies with protection, self blessing, forward focus, and dedication to your own Will. DO NOT OBSESS on your little problem. (Vampyers love obsession...) Try to think of it as something you will have to remind yourself to do, like taking an antibiotic on time every day. Other than that, you have much more important things to do with your life!